The One Planet Summit, held at the instance of French President Emmanuel Macron on Tuesday, December 12, 2017 in Paris, saw the emergence of what observers tag numerous positive initiatives, such as the World Bank committing to stop financing oil and gas exploration and extraction projects by 2019 and AXA insurance halting all new coal and oil sands development, and announcing €12 billion of green investment by 2020. 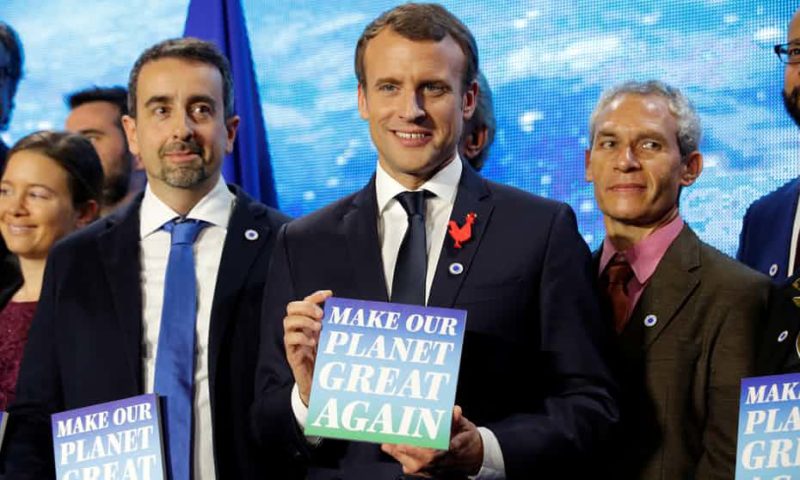 The Climate Action Network (CAN) stressed that while they are positive steps in the right direction, the pledges are not enough to meet the objectives of the Paris Agreement and the needs of vulnerable communities to adapt to climate change and deal with the damages and losses caused by its impacts.

“We know from the 2017 United Nations Emissions Gap Report that we are not on track. The report tells us that we need to triple efforts, step up both private and public finance and accelerate the deployment of renewables to meet the goals of the Paris Agreement and keep warming below 1.5C,” CAN emphasised in a statement made available to EnviroNews.

According to the group, 2017 is probably among the five-warmest since about 150 years and brought massive hurricanes in the Atlantic and the Caribbean, devastating floods in south Asia and out of control wildfires in California. Simultaneously, CAN adds, 2017 might have broken the global record of man-made CO2 emissions after three years of stagnating carbon pollution, indicating that global use of fossil fuels is growing stronger than its replacement by renewables.

“This only means that faster and more urgent and concrete action is needed especially by governments to avert further and severe devastation of people and destruction of ecosystems.

“Despite these warning signs, many governments, private and multilateral development and financial institutions are still funding fossil fuels in the range of hundreds of billion dollars annually. This undermines the Paris Treaty and is a complete waste of time and money that we can no longer afford.

“Governments, banks and other major actors must immediately shift investments from the energy of the past, the dirty fossil fuel industry of coal, oil and gas towards 100% renewable energy, the cheapest, healthiest and most productive energy source. Countries must also move towards energy efficiency and sustainable land use to prepare for a fully decarbonised economy by mid-century latest.

“This Summit was good for the momentum needed for 2018, a critical year filled with many opportunities and moments for countries to step up and demonstrate ambition,” CAN noted
The summit likewise attracted comments from numerous CAN members.

Greenpeace International climate campaigner Gyorgy Dallos: “The end is clearly coming for the oil and gas industry as the pace of change accelerates. After Norges Bank’s historic announcement, the World Bank – as one of the world’s most powerful financial institutions – has sent a damning vote of no confidence to the future of the fossil fuel industry. The world’s financial institutions now need to take note and decide whether their financing is going to be part of the problem or the solution. Critically, we also welcome the World Bank taking the challenge to set a unifying standard for green bonds. This is much needed especially considering the ongoing review of the China Green Bond Catalogue, which still includes coal.”

Manuel Pulgar-Vidal, WWF Climate & Energy Practice Leader: “The need for climate action has never been more urgent than now. Initiatives, such as this Summit hosted by President Emmanuel Macron, are important to keep our leaders committed, political will high and momentum in scaling and speeding up new and existing climate actions across all actors. This is critical if we are to keep warming below 1.5°C and avoid the worst impacts of climate change.”

Harjeet Singh, Climate Lead for ActionAid International: “On the second anniversary of the Paris Agreement, President Macron has successfully attracted a who’s who of world and business leaders. The World Bank’s announcement  on shifting investments away from fossil fuels marks an important step towards a greener global economy.

“Many leaders put the spotlight on climate impacts and strategies to cope, and plenty of sympathy was expressed for the countries suffering from extreme climate events. Unfortunately, sympathy doesn’t cover costs for vulnerable communities overwhelmed with climate impacts. The world needs major mobilisations of public finance to cope with the scale of the challenge.

“President Macron had raised expectations that he would make a concrete announcement of more public finance to help poor countries deal with climate impacts and to scale up climate action. Instead, business took centre stage, while announcements of public finance were disappointingly scarce. Sadly, most of the leaders at the One Planet Summit seem to have forgotten that public financing is necessary for people to protect their safety and food security from climate impacts. While action by businesses is needed, governments need reminding that they can’t fix climate change by giving up their responsibilities and letting business dictate the entire climate agenda.

“The notable exception was the announcement of £140 million from the UK government, to help poor communities suffering from climate impacts. Theresa May sent an important message to world leaders, that rich countries must recognise their responsibility to provide public finance to help vulnerable countries to deal with climate impacts.

Brett Fleishman, 350.org Senior Finance Campaigner: “President Macron and other world leaders, are meeting right now to supposedly discuss shifting capital to climate solutions. But we are here to ring the alarm by bringing attention to the unabated support of the fossil fuel industry. We have research that clearly demonstrates that the French government, through its many agencies, is still invested in the energies sources of the past. This acts as a drag on the climate finance summit. This charade of caring about the planet can’t go on. Every euro and dollar spent on adaptation and mitigation is undercut by even more money spent on the fossil fuel industry. Whatever the outcomes from this summit, the global climate movement will keep on pushing through 2018 to accelerate the transition away from fossil fuels to 100% renewable energy for all.”

Alex Doukas, Director of the Stop Funding Fossils Programme at Oil Change International:
“The World Bank’s monumental announcement that they are moving out of upstream oil and gas finance after 2019 stole the show in Paris. This move from the World Bank demonstrates real climate leadership, and could help signal a broader shift away from the tens of billions of dollars in public finance that G20 governments and multilateral development banks dump into fossil fuels each year. These institutions still provide $72 billion in public finance to fossil fuels annually, which is why a shift away from fossil fuel finance is crucial if we hope to meet the aims of the Paris Agreement. Government commitments to scale up climate finance are important, but they’re not enough. Others need to follow the lead of the World Bank and signal that they will stop funding fossils.”

Nick Mabey, CEO and Co-founder E3G: “The success of the One Planet Summit shows the world has moved past Trump and is focusing on delivering the Paris Agreement. The sheer amount of announcements at the Summit prove smart finance is moving out of fossil fuels and into the clean economy. We must now follow through to make sure governments, businesses and financial institutions increase their climate ambition to 2020 and beyond.”

Sven Harmeling, Global Policy Lead, Care International’s Climate Change and Resilience Platform: “CARE welcomes the One Planet Summit where promising announcements were made to move away from fossil fuels to help slow down the escalation of climate change, such as by the World Bank and the insurance company AXA. However, we are disappointed by the lack of commitments from developed countries for adaptation finance which is necessary to help vulnerable people, especially women and girls, prepare for climate change impacts such more severe floods and droughts. Nations and private donors must step up their ambition in 2018.”

Erin Flanagan, Federal policy director at the Pembina Institute in Canada: “Canada continues to take steps to phase-out dirty coal-fired power from its domestic electricity mix by 2030. And today, together with the World Bank, it took a new step to accelerate the coal-to-clean transition around the world. We commend this important step forward and call on other countries join in this momentum.”

Aki Kachi, International Policy Director, Carbon Market Watch: “On the anniversary of the landmark Paris Agreement, world leaders have gathered again in Paris to reiterate their commitment and many mention carbon pricing. For carbon pricing to actually play the role it needs to, taxes and cap and trade programmes need to start to bite: prices must rise rapidly to 40-80 USD per tonne CO2 by 2020.”

Christoph Bals, Policy Director, Germanwatch, said: “The One Planet Summit showed we are in a new phase of international climate action focusing on achieving the objectives agreed by all governments of the world two years ago. The summit showed that there is enormous momentum to step up global climate action, particularly in three areas: formulating a clear objective for national long term targets of net-zero emissions by 2050; setting an investment relevant minimum price on carbon emissions; and requiring companies to disclose their climate risks and strategies in a forward looking and comparable way. For the future German government, this summit has formulated clear homework: France is asking for a joint leadership role to set a carbon-neutrality objective by 2050, to introduce a investment relevant minimum carbon price for all sectors and make forward looking climate disclosure mandatory for companies and investors.”

Catherine Abreu, Executive Director, Climate Action Network Canada: “Celebrating the second anniversary of the Paris Agreement by showcasing its influence on global economic trends was a brilliant way to drive home the real world implications of climate action and the need to support the world’s most vulnerable communities as they fight climate change and respond to its devastating impacts. However, high-level Summits are only as good as the actions they generate, and the world will be watching to see to what extent momentum is increased to shift financial flows and mobilise the trillions of dollars in climate finance required.

“As one of the founders of the Powering Past Coal Alliance, Canada’s move to put its money where its mouth is and partner with the World Bank to finance the coal-to-clean energy transition in developing countries and small island states is a great example of the action required. Now attention must turn, in Canada and around the world, to phasing out fossil fuel subsidies. Countries can’t adequately fund climate solutions while they continue to fund the problem.”

Nithi Nesadurai Regional Coordinator Climate Action Network South-East Asia: “The One Planet Summit keeps the focus of the global community on the Paris Agreement and outcomes of COP23, as we move into the COP24 next year when countries are expected to raise their ambition on climate action through the Talanoa Dialogue. But for this Summit to be truly meaningful, it needs to send a message that most of the global community, with industrialised countries taking the lead, need to go faster and further than previously considered towards raising their ambition to reduce greenhouse gas emissions. Non-state actors and all sectors also need to take ownership of this effort and step up if we are to get to our goal of keeping temperature rise below 1.5C. It is the least we can do for our planet.”